Wherever India faces an unfair, unjust treatment, we will reciprocate – Shri Piyush Goyal

“100 crore vaccines a symbol of India’s strength, the result of our collective effort”- Shri Piyush Goyal

The Minister of Commerce and Industries, Consumer Affairs, Food and Public Distribution and Textiles, Shri Piyush Goyal today called for free trade within a rules-based multilateral trading system with honesty and transparency as core values. He added that wherever India faces an unfair or unjust treatment, it will take reciprocal action. Shri Goyal also emphasized upon the need for resolution of issues posed by Non- Tariff Barriers in international trade. He was addressing the 54th Convocation of Indian Institute of Foreign Trade in New Delhi today.

Referring to India’s recent achievement of 100 crore vaccines, he said that the milestone was the result a collective effort of 130 crore Indians and a proof of India’s ‘Atmanirbhartha’ and its resolve to leverage its capacities to the best possible extent and to serve the needs of the entire world.

Shri Piyush Goyal said that a convocation is an important ceremony that marks the next step in the journey of the graduates when they grow from ‘acquisition of knowledge’ to ‘application of knowledge’.

He commended IIFT for contributing immensely to India’s external trade since its establishment in 1963. He said that IIFT has been widely recognized for its strong knowledge & resource base and has been consistently ranked amongst the leading business schools in the Asia-Pacific Region. 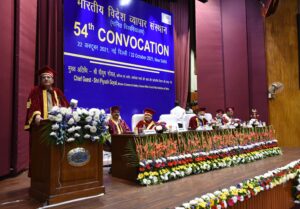 Underscoring the need for a committed and vibrant leadership in the field of academics in India, Shri Piyush Goyal called for enhancing exposure of our students to the best of technology, foreign law, economics, and international trade. Calling for tie-ups of Indian Universities with institutions of eminence across the world, he asked Indian universities to enter into sustained collaborations with such institutions.

Encouraging academic institutions to engage on a much larger scale with the industry, Shri Goyal asked students to take up internships with both the public sector and private players. Speaking of the opportunities offered by online education, Shri Goyal called for more exploration into online and hybrid modes of education.

Shri Piyush Goyal told the students that they were graduating amidst one of the most disruptive events in the collective memory of our times. He emphasized that in the post-COVID ‘New Normal’, we can no longer play by the old rules. He called for using the disruptive interventions brought about by COVID to reorient our conventional, traditional thinking processes. Offering two cents from his versatile experience in foreign trade, Shri Goyal urged the students to ‘Learn, Unlearn, Relearn and Repeat’.
Shri Piyush Goyal said that despite challenges, India under PM Modi has aimed to convert a crisis into an opportunity for transformation. He said that India is being looked upon as a trusted partner & we are engaging with like-minded nations e.g. EU, UK, Canada, Australia & UAE for early conclusion of FTAs.

Referring to India’s ambitious programmes like the PM GatiShakti National Master Plan for infrastructure and multimodal connectivity, Shri Goyal said that there was a need for planned, focussed efforts to create infrastructure in the country by breaking silos and bringing in synergy. “There is a need to bring in quality and productivity in all we do. A ‘Made in India’ product must be a guarantee to the world”, he added.

Lamenting that India had suffered from several missed opportunities in the past, Shri Goyal expressed the hope that we would now be able to seize every opportunity available to us to grow. “The past is a stepping stone, not a milestone”, he added.

Observing that contemporary India was confident & yet dissatisfied, he said that dissatisfied, confident people are the ones who would change the world. He urged fellow Indians to never settle for less and to work together to make India a global leader. 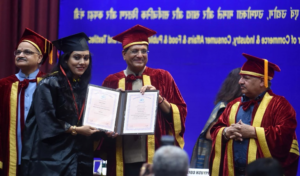 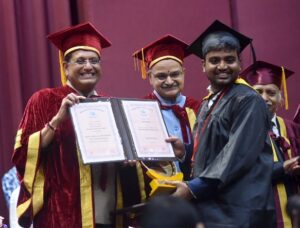